Megaman has…..Okay, let’s get something straight here. I’m talking about the comic book series published here in America. I don’t want to read your entitled crybaby nonsense about “Bring Back Megaman” or “Capcom killed Megaman”. I don’t care. Get over it, as a gamer you know well enough that there are other games to play. You wanna make big deal about it? Go make and post a YouTube video with you screaming into your cheap camera for 10 minutes with the other idiots. Don’t bring it here. Now. Megaman has been a no-show for the past few years with Capcom cancelling games left and right like you didn’t already know that. What’s my take on it? It sucks, but in the long run, I don’t really care or let it bother me, I’m too busy dying in Dark Souls to give a rip.

Now, we enter the comic book realm. Mega Man is produced by Archie Comics and written by Ian Flynn. If the company sounds familiar to you, it’s because they also do a series of comic based off Sonic The Hedgehog and yeah, they do those Archie Comics with him and his friends. The plot of the comics doesn’t deviate too far from the games as Mega Man goes around killing Dr. Wily’s robots to save the day. But it’s really well done and Flynn does his best work to add onto the shallow story of the games to give a deeper, engaging feel and understand the motivations of certain characters. For instance, You would finally get the see what is Wily’s deal with Dr. Light and why does he feel to wreak havoc over and over again. The story is that Dr. Light is exhibiting new robots he created for the betterment of mankind and Dr.Wily…..You know what? You’ve played the games, you know the story. But how it’s executed in the narrative brings a new exciting perspective of it all. Watching the robots easily take out the military and police force is written in such a convincing way that it’s seems justifiable for a little boy robot to be the only one who can stop them. Flynn’s writing make it’s all enjoyable and fun. It makes you feel like you are playing the games for the first time but without all the cheap pitfall deaths. 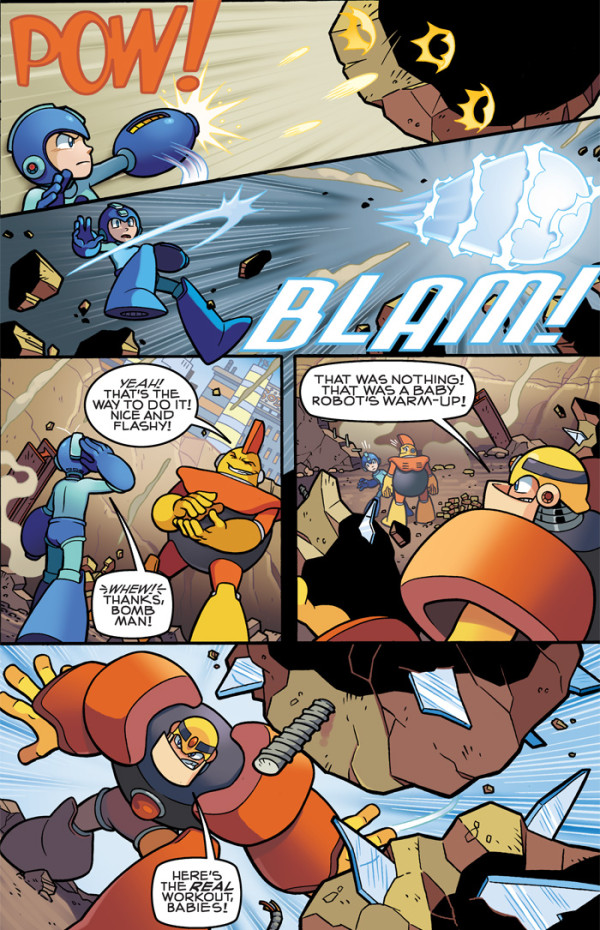 The art is incredible for an American adaptation of a Japanese creation. They don’t make them Americanized or whatever. The artist Patrick Spaziante actually expands on Inafune’s design of the characters. and they look spectacular. That’s pretty much all I can say about the art. It’s a pleasure on the eyes through.

As I stated before, the story arcs are broken up and based of the games but it’s not as predictable as you think. Story Arc 1: “Let the Games Begin” is Megaman 1, Story Arc 3: “The Return of Dr. Wily” is Megaman 2, Arc 4: “Spirit Ex Machina” is actually Megaman 4. That’s not to say they don’t have original storylines. Arc 2: “Time Keeps Slipping” is an original storyline about Dr. Light that borrows lightly from the PSP game Megaman: Powered Up. The rest of the Arcs are all original. As of this date, They are currently in a story crossover with Sonic.

Should You Indulge: Yes!

Where to get it: I recommend finding trade paper backs (The large book format) They are a single collection of all of the arcs. That way you’ll never be left in the dark. You can get it online and Local bookstores.

Is this a substitute for the games: Maybe, the first few stories play out a lot like the games and it makes you feel like you are playing them. But once you get past that and actually read the original stuff, you see that Archie Comics is taking good care of Megaman. But in the long run, No. Don’t look at it as a substitute for the games. It’s a great read all around whether you are a fan other games are not. And before you ask, Yes. They will do a Mega Man X comic.