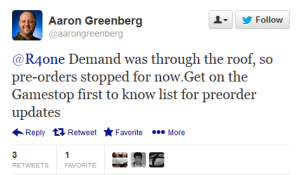 Now, while this is TECHNICALLY TRUE, there is still underlying facts behind the matter that Microsoft and their supporters are ignoring. Firstly, the preorders that were available at Gamestop were LIMITED. EXTREMELY LIMITED. I’ve called a good number of Gamestops in the Dallas & Fort Worth area, and I was able to get some good information (from those who were willing to divulge info) about the Xbox One preorders. Here’s what I found out:

If any of you doubt this, I’m sure you could call a few Gamestops in your local area and get the same information. All in all, Microsoft’s strategy to LIMIT the available preorders to get them to sell out fast, DID turn into a good PR tactic for them. Not only that, but for those who are uninformed and blinded by ze fanboi goggles, they take this sort of information of “sold out” and Microsoft’s message for face value without even inquiring about the finer details behind it. Some of these very same people will tell others to quickly preorder their Xbox One, before its too late; and its that hyped up “sold out” demand that Microsoft wants to infect consumers right now. I’m not a Microsoft supporter in anyway, but I gotta say, Microsoft sure knows how to spin their own good news!

14 thoughts on “MICROSOFT: GAMESTOP PREORDERS ARE “THROUGH THE ROOF” – Microsoft’s Strategy is WORKING”