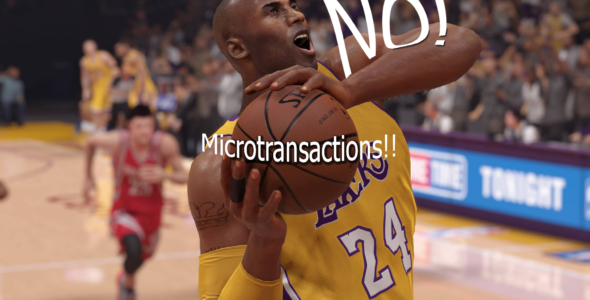 I’ve been hearing over and over again, how some new next-gen titles are implementing the system of “microtransactions” and I really wasn’t to attentive to it. Until now, I really want people to take this with them wherever they go. If we could spread this article, along with all other articles opposing microtransactions on “Full” 60 dollar games, then I am almost positive at one point. Some big name Corporation, like I don’t know, let us say, Sony, and Microsoft might impose, let us just hope, the implementation of “microtransactions” on “Full” 60 dollar games. I know it is a long shot, simply because these companies only care about money, and very rarely do they express any sort of care to their “beloved” consumers. My only hope is for Developers of non-free “Full” games to stop implementing Microtransactions into their titles.

What brought forth this need to express my displeasure with Microtransactions? NBA 2K14 on the PlayStation 4. Let me get this small statement over with, before I continue my pointless attempt to convince money pinchers that what they are doing is just plain wrong. I do not in any way shape or form, oppose Microtransactions in a broad and general form. I understand it’s use in the Free to Play platform and it works well on that specific platform. With that said, I’m sure I am not the only one with this immense brick on my head. When a person, a hard working minimum wage person, purchases a game, whether it’s a 30 dollar game or a 60 dollar game. There is absolutely no excuse a Developer can give you that would make it correct to purposely leave out content on a “full” game to get you to further empty your already empty wallet for the “need” or better said “greedy want” of more and more money. There is no excuse, and all this displeasure I currently have is all due to NBA 2K14. I’ve owned all NBA 2K titles ranging back till about 2K7, in their previous release before their 14th title, they had what you would call accessories that you could, without pulling out your wallet, use on your MyPlayer.

In 2K13, you had the ability to add accessories, tattoos, and improvements to your MyPlayer without having to pull out your wallet. So let me get this straight, instead of moving forward with your title, you remove content and on top of that, the content you do decide to leave in the game, you charge money to obtain that content. Now let me get this straight, you do have the “option” and I use qoutation marks because the word “option” is a very lose term in NBA 2K14. You do have the option to obtain content on this game without ditching out your wallet, the only problem is that every accessory is soo overpriced that anyone with a life will not be able to unlock the content. You have to ditch out over 3,000 VC to purchase most arm guards and sleeves for example and mind my words some of those accessories give you extra points on abilities and traits but will anyone really spend that VC for +3 points on any specific ability when you can ditch out 3,000 VC on the player improvement screen and get more than +6 to +10 points on any specific improvement.

I wouldn’t be so upset with this new system if it wasn’t just that, “new”. What they had before wasn’t broken, and when a previous title had all its content stuffed into the game without having to ditch out your wallet, why should their new title be the same. Now it isn’t only just NBA, it’s Forza, Gran Turismo and many more titles that you purchase at full price, only to have the Developers purposely leave out content to grab more money from you. This isn’t ok, it is far from ok. The first step isn’t to neglect purchasing any of those “microtransacted” content, for the lack of a better word but the first step is to avoid purchasing the game all together. Don’t support this new system, on again “full” 60 dollar games, and you can do that by not purchasing the game. Simple as that. I want to again say that the system works, but only on Free to Play games. Not on games that you pay full price for.