Nintendo is officially on some kind of drug. It has been confirmed by Nintendo consumer service rep  Curtis Neal that Miiverse will be coming to the 3DS next month, but without the messaging system and friend requests feature found on the Wii U. That’s right, we’ll be getting half a Miiverse on 3DS.

NeoGAF member xxbrothawizxx63 noticed during the Nintendo Direct that took place the other day that in the footage shown of the 3DS’s Miiverse, it was missing a messaging icon. BrothaWizxx63 then reached out to Nntendo for some clarification, and the email he received confirmed the grim news: 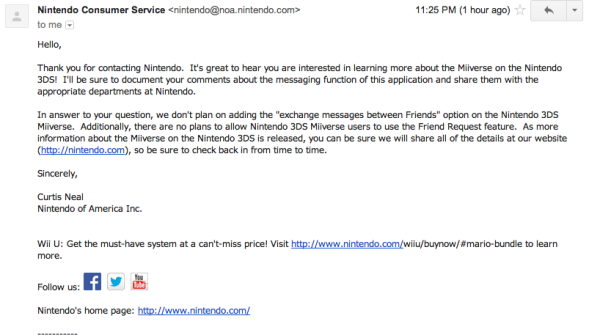 This is no doubt because of the incident that happened last month over SwapNote. Indecent content was exchanged between minors and much older man, and one minor was even taken advantage of multiple times by a man in his 40’s and another in his 50’s.

What took place last month was absolutely sickening and horrible, but Nintendo needs to understand that incidents such as this come with the territory of having an online device. It’s not your job to protect the kiddos, Nintendo, that’s the parents’ job. What makes this decision even more illogical is the fact that you can’t actually exchange friend codes over the 3DS itself. There’s not way to actually contact randoms on the system in order to exchange codes.

Meaning, that obviously the little girls used some other device to obtain the men’s friend codes, meaning, their parents should have been monitoring them in the first place.

Nintendo, your hardcore fans shouldn’t have to suffer because of the incompetence of others.  Plenty of cases such as this have been reported over Playstation Network and especially Xbox Live, yet, you don’t see Sony and Microsoft taking away features or shutting things down.

It’s rough, but it’s what you’re going to have to deal with Nintendo. There’s no avoiding it.