I’ve taken six classes since May 2019 towards obtaining my Bachelor’s Degree in Game Design from Full Sail University. Each class thus far has in some way re-taught me on how to manage my time, how to view math (it’s still as annoying as it was in High School), and how to effectively speak in a presentation format. I have attended college in the past at Illinois Institute of Art – Chicago for the same degree, but due to financial trouble that I was experiencing, I ultimately had to withdraw. After completing one tour in Djibouti, Africa with the United States Navy, I was able to get significant help with covering the cost of my tuition and expenses. I can now focus all my efforts on understanding what each class is trying to teach me. This article will be the first of many as I bring you, the reader, through my journey of becoming a Video Game Designer. I also plan to use this for any one reading who may have goals of becoming a designer one day, but may not know the first steps of how to proceed. I surely didn’t know at first, but after researching over twenty-five different schools in the country of the United States, I discovered that Full Sail University is the best school to execute my training and development to be viewed as competent in the industry as a future prospect for a Game Development Team, (Naughty Dog, Square Enix, if you’re listening, in 2021 I’m your guy).

I wrote about how the process was earlier in August about how making my first card game was an adventure, but I had no idea that the class after and going forward was gradually more intense. I have been mentally challenged and I have not given up because I have become a marathon runner, not a sprinter. I believe that the mentality of knowing there’s more than one class ahead of you and having one bad grade won’t define your overall performance, especially if you refine your weak area when you have down time. The final result of your training will show when the time comes to perform. I left off from the Game Design 1 class, where I talked about my experience and proceeded to take what was, in my mind, the hardest math class I’ve experienced in Discrete Mathematics. This math class was very special in what all was discussed in that month. We tackled combinatorics, matrices, boolean algebra, summation notations, and logic and much more. Since I graduated High School in 2009, I never went above Business Math level and my understanding of math was terrible. It was partially due to the teachers only knowing how to teach the formulas and problems one way and not having patience to explain upon any further. I did have some exceptions to the rule with some teachers, but average speaking, I didn’t have a good go around with high school (If only College me could go back and complete High School me’s school work). My College Professors’ have been nothing short of amazing with being lenient, understanding and helpful in every class. I do not feel embarrassed for asking many questions and trying to master the work provided. 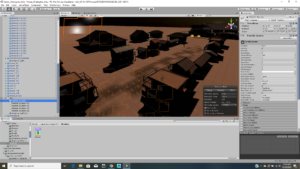 After leaving Discrete Mathematics, I had five classes under my belt, and a grade point average of 3.9. I was feeling pretty confident to head on to Design Tools, which tackled Unity, a Game Engine that many developers use to produce games. I also used minor script writing at the base level in C#, one of many programming languages and one that is expected to learn. A challenge for this class wasn’t so much the work, it was more or less racing with the clock to not only understand the lectures, but to complete the work before the due dates, while in Romania for the Navy. My instructor was very understanding with the aspect of my military obligation and tried to get the assignments opened as early as possible to give me the most time to complete the projects. The assignment was called “Winter in Japan” and the goal of the assignment was to create a street in Unity that had Japan assets (that could be made from Maya and imported to Unity, or bought from the Unity Asset Store*), and have your creativity spark to make something from inspiration to demonstrate basic understanding of Unity. *The only caveat to using an asset from the asset store was to avoid a style of Japanese inspired assets by one designer that made the assignment too easy for the scope of the course.

I finished off the Design Tools course with making a presentation called a Pecha Kucha, which translates to “the sound of conversation” in Japanese. It was quite fitting that I was doing a form of presentation based off of a Japanese translation, as I am a huge admirer of the culture of Japan. The goal of the Pecha Kucha, is to create a presentation that has exactly twenty slides with no more than twenty seconds of talking per slide, resulting into exactly a 6:45 presentation. We were also required to use software to record our face while doing the presentation along with the screen capture, something like Streamlabs OBS was sufficient. After completing that assignment I proceeded on to my now, at the time of this article’s post, current class, Programming Foundations 1. In this class we are diving deep into the foundation of understanding how programming languages are very attention to detail and that a (;) means something totally different than (:) and can be critical in designing a game. Once I complete this class, I will talk about my experience with that.

If you enjoy learning and going along for the ride for the journey that I’m embarking on, let me hear your thoughts.

Stay tuned to GaminRealm.com for more coverage of my journey of becoming a Game Designer.