There are nine Final Fantasy games that are coming to Xbox Game Pass in 2020. If you are new to the series, or are a long running fan of Lighting, Squall, Tidus, Cloud, or even Noctis you will want to continue reading to find out which titles are making the list. At the X019 in London, Final Fantasy brand manager, Shinji Hashimoto has just announced that nine titles are joining the Xbox Game Pass. This is amazing news for Xbox, because until further notice, Xbox One and PC users will have access to two Final Fantasy titles that haven’t become available on another current generation console. 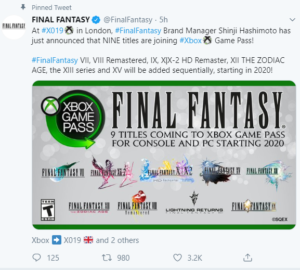 Final Fantasy XIII and XIII-2 will be debuting for the first time since the PlayStation 3 and Xbox 360 days first on Xbox Game Pass in 2020, unless there is a remaster in the works for Nintendo Switch and PlayStation, which nothing was stated as of yet. I am excited to be able to play this game for the fact that the platinum trophy eluded me by soft lock on my end. I hope that you enjoy the journey through Final Fantasy! Did your favorite game make this list? Let us hear your thoughts.

Please stay tuned into GaminRealm.com for more coverage about Xbox Game Pass and all things gaming.