According Major League Gaming’s social team on Twitter, Nintendo is actually interested in bringing Super Smash Bros. 4 to MLG. When asked by a follower if the next Smash game will have an appearance next year at MLG, Sundance DiGiovanni answered with a rather surprising revelation: 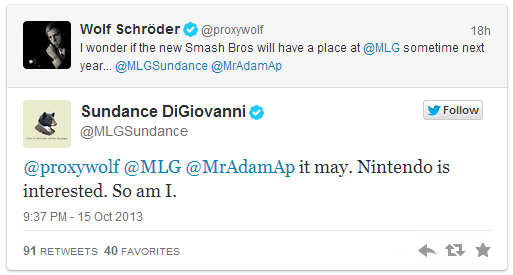 Now it would be no surprise to see Smash 4 make an appearance at an MLG tournament, seeing as how both Melee and Brawl were featured at some point in MLG. But to have Nintendo, Nintendo actually interested in the competitive Smash scene is a first for the history books. While Smash has always been at fighting game tournaments everywhere, Nintendo themselves have never been even indirectly involved with Smash’s inclusion.

Hell, earlier this past Summer we witnessed Nintendo trying to shut down the Melee tournament for EVO, but due to fan outcry they reversed their decision at the last minute.

So it’s strange to see Nintendo supposedly interested in this kind of thing. Maybe this is a testament that Sakurai truly does mean for Smash 4 to be more competitive gameplay-wise than Brawl.

One thought on “Nintendo Interested in Bringing Smash Bros. 4 to MLG”