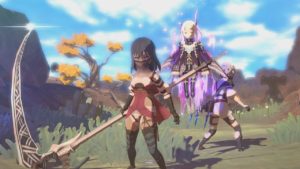 The RPG genre is one of the most played in my catalog, running in at close second is Action-Adventure. Oninaki was a title that I knew I was going to be excited to take on, but I had some disappointments. Overall I feel that this game is great to acquire a trophy in and have an RPG fix until Final Fantasy VII comes along or the Ni No Kuni Remaster comes along. Square Enix is one of my favorite developers and they have made some amazing productions, some that are even legendary status. As I downloaded this game waiting to feast my eyes on it, I noticed how small the file size of this game was, and knew that features that I expect from a current generation — even next generation RPG were missing. However, while certain features weren’t in the game, Oninaki wasn’t unplayable. I just had to find reasons to find this game interesting. I found a wide variety of mechanics and features that made the game stand out from being boring but I’ll separate my likes and dislikes into sections.

This story revolves around a cycle of death and reincarnation. The main character that you’ll be using, Kagachi, is a watcher who is tasked with enforcing order and justice of the Law of Reincarnation, as well as helping the Lost accept their fate to pass on to The Beyond. It seems that Kagachi is in a Watcher’s Guild or Organization, ultimately, he answers to the council that holds trials for offenders. In the story you are teamed with a fellow watcher named Mayura that knew you since you were a child. You also learn that you can utilize Lost that have can’t be reincarnated called Daemons that help you in battle and provide protection.

I actually at first glance, was disappointed that still some development teams don’t see the value in a full voice acting production. I believe this game truly could have benefited from not having only minor words spoken and recycled through text boxes. The other issue I have is that the voice acting is only in Japanese, not giving the player an option to hear an English voice actor give the lines. While some games sound cheesy with English voice actors, I truly believe that productions at minimum going forward, games should have full character voice acting. Text boxes should be kept to a minimum. I can understand that the budget and time constraints could have prevented the use of hiring voice actors to read more lines and allow for syndication as well.

One of the main things that make this game stand out. During your travels in each area, you will encounter enemies and the living world will have them as well as the spirit side, known as the Veil. If you cross this area before killing the Sight Stealer nearest you, you will die instantly as attacks are lethal and you can’t attack back. I stepped over into an area that I had not traversed in before and saw an enemy on the other side and tried to attack it and died instantly.

I feel like this could have gone really well, if a guard option was always available. I noticed myself abusing the square button, the main attack, on all small enemies and even some larger enemies when I figured out their attack patterns. The cool down mechanic of larger attacks was a nice feature to implement a feel of strategy there, ways to charge the attacks come as you level up. The enemies seemed redundant after a few missions and making larger versions of themselves to become a “Sight Stealer” felt like a rushed approach. There was some areas where if you encountered a Sight Stealer, that it was just a gate with enemies jumping out of it. I think more enemies could have been designed to complement the dungeons early on.