Have you been looking forward for Mirror’s Edge 2? Well today there is some interesting speculation regarding the release date and interestingly enough, it was speculation caused, possibly inadvertently, by Microsoft. 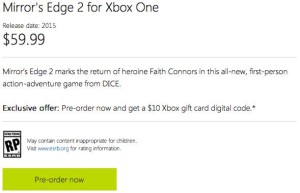 Not only is it available for Pre-order but it shows a 2015 release window. While I don’t really see Mirror’s Edge 2 releasing this year, it  isn’t impossible. Judging by what we know, which is very little, the game is no where near ready. So don’t get your hopes up.

Place holder dates are very common in the industry, so don’t read too much into it. We will probably get more information about the game at E3 this year. Who knows, maybe late 2015 isn’t out of the question.