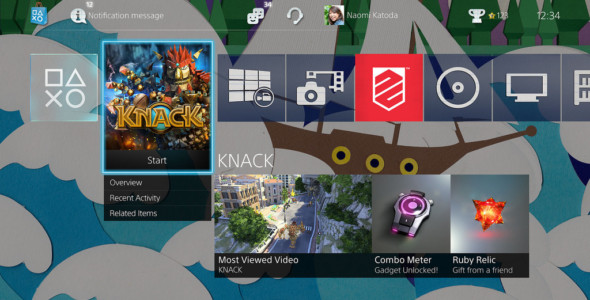 The highly anticipated PS4‘s upcoming system software 2.00 update, code-name Masamune, adds some big features including, Share Play, YouTube support, and Themes. Some other key features to be noted are listed below:

– USB Music Player: PS4 owners will be able to play their own music in the background while playing a game using USB Music Player*. After inserting a USB stick loaded with music into the system, a new option for USB Music Player will appear. Supported filename extensions include MP3, MP4, M4A, and 3GP. You can’t save music to the Ps4 HDD.

– Change colors: PS4 owners can change the background of the home screen from light blue to one of seven new colors: gold, blue, red, green, purple, pink, and grey.

– Content Area and Library: PS4′s Content Area, which shows the latest games and apps a PS4 owner has used, has been redesigned to help make it easier to quickly find and access content. It now shows 15 of a player’s most used apps or games, and additional items will be added to a player’s Library. The Library on PS4 has improved filter and sort functions to help organize contented by type (game / app / TV & video), name (a – z or z – a), recently used, or install date.

– Enhanced voice commands: The ability to control PS4 using voice has been improved. Players can now say ‘PlayStation’ to begin commands, and ‘All Commands,’ to see a list of all voice command options available. New voice commands were added for live broadcasting, including “Start broadcast,” “End broadcast,” and “Find face.”

– Add to library: The monthly free PlayStation Plus games will have an “Add to Library” button in the PlayStation Store. This button will add a game to a PS4 owner’s library without downloading it – saving space on their hard drive.

This delightful update will be launched Tuesday October 28, 2014.