Whenever I go onto YouTube looking for certain video, maybe a review of a product I am interested in or perhaps someone’s opinion on a topic, many times I see a pretty good video that is plagued by poor audio quality. While it’s certainly a problem on YouTube, it is even worse when looking for a podcast. While I understand that a good portion of the YouTube videos are simply just a consumer showing a product they purchased and they don’t take their channel further, but for some long running Podcasts, I have to question why they are struggling with audio quality. When making a video or a podcast, content is obviously extremely important, without good content viewers will simply move on; that being said if your audience cannot understand you or it is physically painful to listen to your audio, your content isn’t going to have an impact and your audience won’t stick around long enough to retain it. While bad audio is a terrible, terrible, thing, luckily there is a remedy: Enter the Rode Podcaster.

Now let me just start off by saying that there are actually many remedies for poor audio. Today we will be focusing on a USB Dynamic microphone called the Rode Podcaster. Now when someone mentions USB microphones, the first name that comes to most people’s minds is “Blue”. Blue is most famous for the Blue Snowball, a spherical condenser microphone that became a huge hit almost instantaneously, and the Blue Yeti, a feature packed condenser microphone with exceptional quality. The name “Rode” is probably foreign to many of you but in the Microphone world, a world consisting of Electro-Voice, Shure, and Heil Sound, Rode is a big player. Rode has a great reputation and is recognized by many artists and radio stations. Doing research, I found that they have a huge line of great XLR microphones. But how well does all of that translate to their USB solution? Seamlessly. 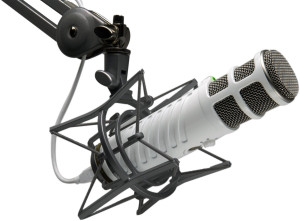 The Rode Podcaster is a good-looking piece of equipment.

While many competing usb microphones are made almost entirely out of plastic, the Podcaster is made completely out of metal. This microphone is really heavy, which makes it feel like a premium piece of equipment. The Rode Podcaster is no slouch in the aesthetics department either, sporting a glossy, white, coating with stylish groves in the metal body. The microphone grill is silver and is styled very similar to that of popular dynamic broadcast microphones like the Electro-Voice RE20. Underneath the grill, is an internal windscreen; it is a nice addition and will reduce plosives when combined with proper microphone etiquette. My only complaint about the build quality is the headphone volume dial, as I have found that it is very easy to remove. While it’s easy to put it back on, at the $230 price range, I expected the dial to live up to the rest of the product. Despite that small gripe, the Podcaster is still one of the first times that I experienced a large price tag become justified the moment I had it in hand. It makes a great first impression.

The most important part of the Microphone is going to be its functionality and sound quality. The Rode Podcaster is pretty straight forward; you simply plug in the USB cable into the Microphone and the computer and select it in your recording software. Before you do all that, you are going to want to mount it on a stand. To do that, you simply unscrew the silver mounting ring on the bottom of the Podcaster, place the black mount where the mounting ring was, and then sandwich it by screwing the mounting ring back on. After you have your Podcaster situated, you can start recording. The Podcaster has a nice feature, referred to as “zero latency monitoring”. This essentially means that you can plug your headphones into the Podcaster’s 3.5mm headphone jack and listen to your voice as you speak. This is an extremely handy feature especially if you are still getting used to the Podcaster. With a microphone like the Blue Snowball, there would be no way to monitor your sound in zero latency, so if your gain was too high, or you were too close to the microphone, you wouldn’t know until you ended the recording and listened to it in the recording software. When increasing your workload, having the ability to make adjustments on the fly allows you to really speed up the production and post-production process; that is vital when trying to get reviews, commentaries, vlogs, or podcasts up in a timely manner. Along with the cool monitoring features, the Rode Podcaster can also be treated as an output device, meaning that you can listen to the audio on Skype or Google Plus, which is extremely useful if you are recording a podcast over one of those services, as you will be able to accurately hear how the podcast will sound, your voice included.

The PSA1 studio arm makes recording so much easier.

While the Rode Podcaster has many positives, that does not mean that it is going to be the ideal microphone for every situation, no microphone will be. For those that want a good microphone for vlogs the Podcaster isn’t the best choice because unlike the Blue Yeti, the Rode Podcaster is not a condenser microphone, it is a dynamic microphone that needs to be very close to the speaker’s mouth for optimal results. Having a big microphone will cover up the speakers face; this simply won’t be ideal for most vloggers. It is also not going to be the best option for those that do not have the desk configuration to be up on the microphone. Rode does offer the PSA1 Studio Arm, which I recommend to anyone that is planning on buying a Rode Podcaster, it just makes talking so much easier because it allows the user to move the microphone as they please. The lower sensitivity may sound like a weakness for dynamic microphones, but in actuality it is a strength. Let’s players and users with less than ideal recording conditions, will find the lower sensitivity to be a huge advantage. The microphone will not pick up a lot of background noise, which is something a condenser microphone will do. I found that recording gameplay using the blue snowball for commentary, introduced sounds I did not want, mainly button and analog stick sounds; the Podcaster eliminates those things, which leads to much cleaner recording. In terms of sound quality, the Rode Podcaster is fantastic. It provides a much cleaner sound than the Blue Snowball, while providing a slightly less vibrant but more isolated sound than the Blue Yeti. At the end of the day, buying the Podcaster isn’t really about paying for sound quality that blows away the competition. It is about a microphone that will speed up post production process by limiting background noise.

Overall the Rode Podcaster is a great microphone for recording excellent, broadcast quality, audio. It is perfect for podcasting, commentaries, let’s plays, and really anything that requires clean sound. It is a beautiful microphone that justifies a higher price with its ease of use, functionality, and premium build. Oh yeah, did I mention it comes with a 10 year warranty? If something goes wrong, you are covered for 10 whole years. Talk about peace of mind. Rode brought every ounce of their ambition with this one, delivering a microphone that cements itself as one of the most premium USB microphones on the market.