At first glance when receiving the Rotor Riot wired gaming controller that is exclusively for iOS devices, I didn’t know what to expect. There are many rip off controllers out in the market that promise a specific or various benefits of using theirs over another. I’m here to say that this controller is by far the best controller that I’ve gotten my hands on, and what was described by the company at being able to do, one should believe them. There was even a few benefits that this controller provided that I believe Apple themselves need to design in their future technology to provide. I recently just switched to an iPhone 11 (standard) from a Samsung Galaxy S9 and didn’t have any high hopes for this controller so I had a large open mind. 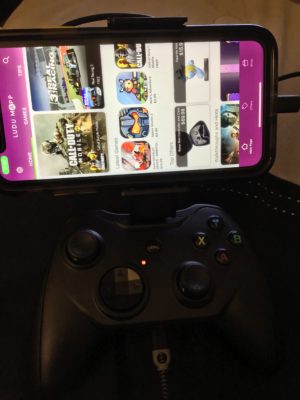 One thing that stood out to me was how sturdy the phone stand for the controller was. I have a case on the phone and yet it didn’t slip out nor did it not support phone cases. I’m not too sure about anything other than a Tech21 case, but I’m sure Otterboxes will work just fine. The Rotor Riot controller will have one lighting usb cord that will connect into your iPhone’s charging port and will immediately prompt you with a permission to allow this controller to have access to your phone and redirect you to its very own app store known as LUDU MAPP. This is the app store that you will spend a few dollars in, there’s a list of notable games in the store, from Call of Duty mobile to Fortnite. Call of Duty mobile at this time, does NOT support this controller. I also played a couple other free games, like “Sky” and Apple Knight.

You can literally play games on your phone all day and night because the controller has a CHARGING PORT! It daisy chains everything together, making your experience endless and on your terms. This controller is a total steal if you’re in the market for a dependable and reliable controller to use while mobile gaming. Combine this set up along with Bluetooth headsets and you’re good to go immerse yourself in any game world. There’s also remote play support for PlayStation, Xbox and Steam. I connected my phone to Steam using the LUDU MAPP store and you will be prompted on your PC/Laptop for the code that is displayed on your phone. Just enter that code in, and you’ll be able to access your Steam account no time. I was playing Tales of Symphonia on Steam with no issues. The price for games are pretty fair and there are a number of decent free games to choose from. You will not regret picking this controller up. It resembles a smaller version of an Xbox One Elite controller that does the iPhone justice with constant battery upkeep allowing you to game until you cannot game any more.