The South American Retailer responsible for leaking several Amiibo before they were officially announced, including Greninja, Jigglypuff, and the three Splatoon Amiibo, has posted a listing for The Bioshock Collection for PS4 and Xbox One complete with a release date of November 27th. 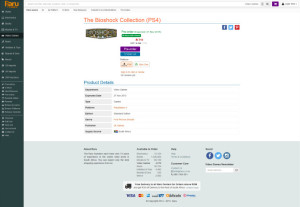 Screen capture of the leak

While this is only unofficially confirmed, and we have yet to hear an official announcement, the source is somewhat reliable due to the fact that they have leaked stuff like this before accurately. While many people are sick of 7th generation rehashes, I think that the Xbox One and PS4 will be able to really make the games shine like never before. What are your thoughts on this? Will you be picking up this collection if it is real? Do you think it is real? Comment below and let us know!

2 thoughts on “Rumor: PS4 and Xbox One to get The Bioshock Collection”