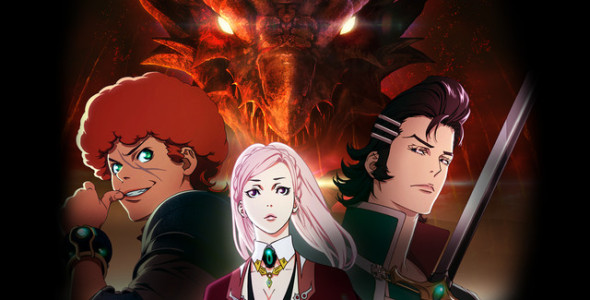 Among the series that have been catching everyone’s eye this anime season, I believe that Shingeki no Bahamut stands out among the rest, and really gives a name for itself within the first five minutes of the first episode. Let’s get started.

Shingeki no Bahamut is beautifully animated, and holds very different character designs, some that I’ve never seen before, especially within the main cast of characters. Favaro, a bounty hunter, and Kaisa, another bounty hunter who appears to be chasing him for apparently ridding him of all his royal inheritance. In this series, it follows Favaro, who is a complete and total doofus, but also kills bad people for a man named Bacchus.

Meanwhile, we meet an unnamed girl who appears out of nowhere, and helps Favaro kill a giant monster, only to find out that she’s a demon who is trying to find her way into a snowy realm called Helheim.

This series looks very promising, and will captivate you with its gorgeous animation and mesmerizing OST. It’s funny and clever, as well as intense and action-packed. It’s definitely not an anime for younger people, as for it’s mature for its audience when it comes to using your noggin and paying attention to what’s happening.

I look forward to watching more episodes, and I’m stoked to see what is held in store for our protagonist, Favaro, and his journey to Helheim.

What did you guys think of the first episode? What’s your favorite anime this season so far? Let us know in the comments!