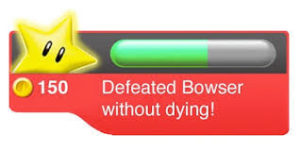 A “Congratulations, you just defeated Bowser without dying!” trophy message would look amazing after playing Super Mario Odyssey and thinking that making a clean run at Bowser would be impossible. After playing the Nintendo line of consoles for twenty-five years, I’ve come to realize that after being the first of many big accomplishments, they’re still lacking on some modern day features that PlayStation and Xbox fans and even Steam players are used to, and that’s a trophy system. Nintendo has a wide array of third party games, little by little, coming to the platform and all that can really be seen, is how long you’ve played a particular game. I would hope that Nintendo fixes the Online to include a trophy system among giving us features that other consoles had for previous generations.

Especially if Nintendo is hosting Xbox Game Pass and other titles like Legend of Zelda: Link’s Awakening and Luigi’s Mansion 3, there should be some in-game prompt stating a secret was discovered or we beat a tough area without getting hit. I would also enjoy to see how creative Nintendo could be with it, if they decided to pursue the trophy route. Some examples of trophy/achievement systems they could use in my opinion would be: Stars, Coins, Triforce Shards, the obvious bronze, silver, gold, and instead of platinum, it could be a mushroom. Another idea is allow players to choose a tier list for their trophies based off of Nintendo’s flagship games, like Star Fox, Metroid, Zelda, and Pokemon. It’s a long shot, but if Nintendo implements a trophy system, I hope they’re as creative as possible with the framework.

What do you think about Nintendo not having a trophy system already in place? Do you think we should have one? Let us know in the comments below.

Make sure you come back to GaminRealm.com for more opinions about much needed gaming features.