In the latest issue of Famitsu, it was confirmed that Fi from Skyward Sword would be featured as a playable character in Hyrule Warriors. 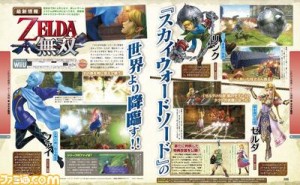 It was also revealed that both Link and Zelda would be able to wear their Skyward Sword attire, in addition to the Twilight Princess alternate costumes that were revealed not too long ago. It appears that the chain ball weapon from Twilight Princess will be making an appearance as well.

It seems new characters are getting revealed at a rapid pace. I really enjoy the fact that they are putting so much emphasis on female characters for this game and I’m excited to see what Fi will play like.

What do you think of this addition? Who else would you like to see playable?