So far, Sony has been making one great move after another. You’ll hardly hear anything truly negative when it comes to the PS4. As of right now the console is the go-to system for most gamers out there seeing as how the Wii U is “underpowered” in their eyes and lacks “mature” titles, while Microsoft simply ‘can’t be trusted after what they tried to pull’ with the Xbox One. While I disagree that the Wii U isn’t a feasible platform and you’re the devil if you buy an Xbox One, I’m inclined to agree that Sony is currently the cleanest of the bunch. In my eyes they’ve made a lot less mistakes with the PS4 than the competition has with their respective consoles.

And while I’m fully aware of the Vita’s current woes, I’m speaking strictly about their console-side of things.

The PS4’s running full-steam ahead right now – it has a tremendous momentum. It’s almost like a 2-ton snowball that’s still rolling down the hill. Sony has the strongest specs of the three, the affection of 3rd-party publishers and indies alike, and a perfectly-priced next-gen system. But one very important problem persists for Sony, and the simplest way I can put it is this: They don’t have that one game.

What I mean by this is simple; Nintendo has Mario and Microsoft has Halo. Both companies can depend on these series to have the mass-market appeal they need to cause waves through the sales charts each and every single time. Not only that, but both of these franchises are timeless (well, Halo to a much lesser extent than Mario, but still). Mario is not a story-focused series and has a timeless gameplay formula, meaning Nintendo can use Mario for however long as they’d like to. Halo 4 sold just as much as Halo 2, showing that gamers generally have yet to grow tired of the series, and the Halo universe is so expansive that they can jump to different Spartans or introduce new threats at any time, allowing 343 to refresh the series whenever they need to or want to. And of course, both of Nintendo and Microsoft’s mascots come from these two series.

And Sony lacks this important kind of weapon.

Remember the PS1 and PS2 days when Sony absolutely dominated the market? Why was that? Yes the fact that the PS1 and PS2 could play CD’s and DVD’s respectively greatly helped the sales of the platforms, but the major contributing factor was that they had that game, or rather, those games. Grand Theft Auto, Final Fantasy (mainline), Kingdom Hearts, Metal Gear, and so much more, were all essentially Playstation exclusives that appealed to everyone and you absolutely had to get a Playstation system to enjoy these games (for the most part). But now all of these series have gone completely multi-platform and Sony is left with newer, weaker IP’s.

While Uncharted and God of War are both great series, they lack the timelessness element that Mario and-the-like have. Uncharted, in my opinion, has been fatigued due to having 3 games in the series released on a single console with 2-year gaps in-between each release, not including Golden Abyss on the Vita. And while I believe that Naughty Dog could maybe squeeze out an Uncharted 4 without making the series seem too redundant, I don’t believe the series could go anywhere beyond that. Drake’s adventurous antics already felt a tab bit over-played and dried-up in Uncharted 3. Falling through a wood floor and escaping Indiana Jones-style scenerios is only amusing for so long.

Kratos, you’re a great guy and all, but the quick-time-events aren’t cutting it anymore.

As for God of War, I wouldn’t say the problem is too-many-games-to-quickly, but rather, the fact that the series essentially hasn’t changed a bit since the very first game, and probably because it can’t. If you’ve played one GOW, from a gameplay standpoint, you’ve played them all, and just like Uncharted, some of Kratos’s exploits are starting to tire out. Ripping off heads, limbs, and splitting enemies open was very entertaining to first few times around, but we’ve seen it so much now to the point of dullness. But most importantly, the the highest God of War has ever sold (with God of war III) was 4.5 million units. Great sales, but it just speaks to the choir rather than appealing to the masses.

I assure you – despite the fact that I truly and thoroughly enjoyed both of these series – they will cease eventually. Most-likely with this generation even.

For Sony’s other series such as Killzone, Infamous, Little Big Planet and-the-like, none of these series sell through the roof and all have seen a notable decline in sales since their first entries on the Playstation 3. Even Gran Turismo, despite being a juggernaut on the sales charts, has seen a steady constant decline since the 3rd game. Not to mention that GT6 is releasing on the PS3 so you don’t need a PS4 for the next Gran Turismo game anyways.

Some of you may be thinking I’m bashing Sony and asking the question, “Why does this matter though?” Keep in-mind that this article is being written from a highly competitive point-of-view. Yes, Sony can be widely successful with the PS4 without having that one series that utterly appeals to the masses. But if Sony wants to actually win – beat-out Microsoft and Nintendo – then that’s a different story. Let’s leave all bias and fanboyism out the door for a second here:  Both of the competing companies have much stronger IP’s in their arsenal than Sony does, and that’s a huge disadvantage. Nintendo has guns like Mario, Zelda, Donkey Kong, Super Smash Bros., Pokemon, etc, while Microsoft of course has Halo and a whole back-catalog of Rare IP’s that they can utilize whenever they want to (and they’ve started to with Killer Instinct), not to mention that the company is more than willing to money-hat for exclusives. 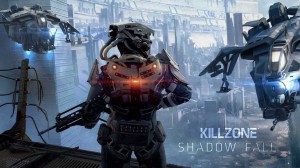 Shadowfall will be epic, but it’s not sending general consumers in droves to the PS brand.

Infamous and Killzone don’t hold a candle to these series, and a lot of these new IP’s (while welcomed) again lack the timelessness the competitions’ franchises have. Don’t get me wrong, these new franchises such as Little Big Planet and The Last of Us are high-end games, but what I’m saying is that these games only lead to short-term success. And while Killzone and Infamous are still going, they’re not bringing any new blood into the Playstation fanbase; they’re made to please the already-existing fans.

If you’re a die-hard Sony fan, I understand that none of what I am saying will mean much to you. You may be saying, “Tons of new IP’s and sequels from PS3 titles? That’s great, what are you talking about?”, but once again keep in mind that I’m coming from a competitive, business standpoint. Sony needs to do more than just appeal to their hardcore fans. They need a game on store shelves that will sell 10 million units and can be enjoyed by adults and kids alike. A game who’s main character can be the official face of Playstation. Something along the lines of what Crash and Spyro were back in the day, except with dramatically more sales.

To wrap things up here, naturally this is strictly my opinion (this article is labeled as an opinion piece, after all), but despite that fact I know some of you may be mad at for whatever reason for creating this article, but it’s just how I feel. If you disagree that’s great, just leave me your thoughts down below calmly explaining why and I would love to discuss this further with you. And for all we know I can very much be dead-wrong and Sony could easily beat out the competition without a juggernaut like Mario or Halo.

Fire-off in the comments people.