Information has been found in Star Wars: Battlefront’s website’s code that the game is going to be released on November 17th of this year. EA and DICE are going to officially reveal the release date and first gameplay footage of the reboot tomorrow (April 17th). The game is going to be releasing on PS4, Xbox One, and PC. For now, a single picture from the game has been unveiled. 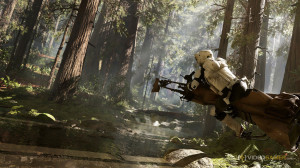 If the game is really going to look this good, and it’s not just a pre-rendered cutscene, then color me impressed. We’ll find out more at tomorrow’s big reveal for the game.