Masahiro Sakurai, the director of the Super Smash Bros. revealed on Miiverse a new mini-game for the Nintendo 3DS version of the game last night. He announced a new mode called a “Target Blast”. He also shared two screenshots showing the new mode.

What’s up with this bomb? This looks like the stadium for the Home-run Contest, but there’s no bat. Once you touch the bomb, it begins to count down. Give it enough damage and launch it at the right time…then once the bomb’s countdown hits zero…!!

He Continued to say:

…It goes BOOOOOM! Not only will the blast destroy targets, but it’ll also cause a chain reaction by using shattered walls and bomb blocks–all of which contributes to you getting a high score!! This is a new activity that combines the concepts of Target Smash and the Home-run Contest–it’s called Target Blast! Your final score is the total you rack up over two rounds. Of course, your Target Blast scores contribute to your Global Smash Power, too. 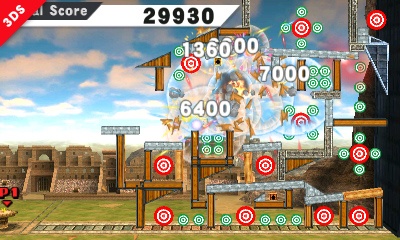 I’m curious to see what new games modes will be coming to the Super Smash Bros Wii U.