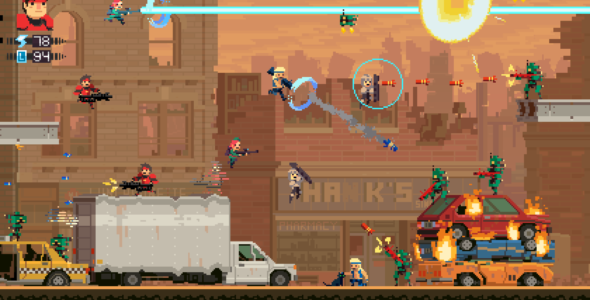 Holy Crap! This game looks AMAZING! Developer Capybara Games is bringing its radical 2D run-and-gun game, Super Time Force, to Xbox One in addition to Xbox 360, and aims to launch both versions simultaneously. The game will be self-published on Xbox One through the ID@Xbox program and has a new launch window of early 2014.

“As 2013 waned and the ruckus around new consoles got louder, we decided that launching on both the Xbox One and Xbox 360 would be the best way for Super Time Force to get out there,” Nathan Vella, Capy co-founder and president, told Joystiq. “We really believe in our game, and we’re happy that ID@Xbox gives us a chance to bring it to players who made the jump.”

Well, I support your game as it actually looks like the kind of game I really want to play. Can’t Wait.