A small break is necessary when it comes to talking about this series, because it’ll definitely leave you stunned. Here’s a recap of what happened in these last two episodes to catch up on what we’ve missed.

What did I think of this last episode? In a way, yeah, there was really no other way to end it, and that is pure genius. This series didn’t hold your hand through it. You had to think, you had to feel, and you became attached to these characters in only the eleven short episodes we got to spend with them. Watanabe did it again. He captivated us, and most importantly, he allowed us to think in a different way.

Nine and Twelve’s motives were that of something as small and what appeared to be fickle, but it wasn’t. All they wanted was for the public to know they existed. They wanted to be remembered by people. And that, my friends, is incredibly moving. They wanted to be captured from the very beginning. They were just waiting for the right moment, when the whole world was watching them. That was what they were trying to accomplish by stealing the atomic bomb and setting it off into the atmosphere. That way, other nations were forced to acknowledge their presence, and in turn, it would be the leading of one of the most heart wrenching moments I’ve ever seen. 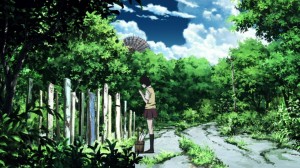 I am disappointed that Nine and Twelve are no more, but like I said, you could not have ended this series any other way.  Even if the manner of how it happened wasn’t necessarily what I wanted. They were acknowledged, and most importantly, they will be remembered. Nine, Twelve, and Five are all free, and can fly high knowing that they accomplished their greatest goal. All because of VON. VON, meaning ‘hope’ in Iceland.

What did you guys think of Terror in Resonance? Still crying, like I am? Let us know in the comments!