Okay, guys. HOLY CRAP!! That is what I have to say about this week’s episode of Terror in Resonance. We’ve discovered so much, and we even got to see a tender moment between everyone’s favorite pairing–Twelve and Lisa. Let’s get started!

So the Athena Plan that Shibazaki was investigating was indeed a project to enhance young children’s senses to make them into Savants, which are people who are greatly skilled in education, music, art, and other things. They produced a drug that was only effective on young children under the age of five, that would in turn, transform these kids into child prodigies. However, a lot of the kids died due to the injections and daily tests. A total of 26 kids were entered into this program, and only three survived: Five, Nine, and Twelve. 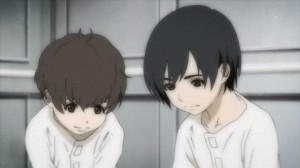 Hence the reason why this information is so crucial, and it also explains the random spells Nine and Five have where they clutch their heads as if they were in severe pain. This is why–the drug’s side-effects are that of headaches, fainting spells, and eventually death. And Nine and Five are experiencing these symptoms. Once again, things aren’t looking so good. Then we’re switched to Twelve, who is desperately trying to save Lisa, who he later finds on a ferris wheel with a bomb attached to her. To his own horror, he finds out that it’s not only one bomb, but multiple… and he has a little over eight minutes to disarm them before they all detonate.

This scene was so moving to me, because it really reveals how much Twelve truly cares for Lisa, and it also shows Lisa’s character development over the series. She started out as this weak girl, who only wanted to run away from home to get away from her overbearing mother. She didn’t believe that anyone could love her, and in a sense, Twelve was able to tell her that he does care. He does love her. And this is the moment where she decides that the only way to get out of this alive, Twelve would have to leave her behind, and let the bombs detonate… because Nine needs him.

That right there, is an act of selflessness, and complete disregard for her own well-being.

But of course, Twelve doesn’t listen to her (Which I was hoping to God he wouldn’t, because I love Lisa and would be devastated if she died)

The episode ends with Twelve revealing to Five where the coordinates of the bomb he and Nine stole, in exchange for Lisa’s life. Betraying Nine, Twelve is left feeling more helpless than ever. Then, at her own hideout, Five passes out. As always, a fantastic episode, and the feels are strong with this one.  Great emotion, the OST was beautiful with the ferris wheel scene, and we learned a lot about Nine, Twelve, and Five’s past and what is happening to them. I regret to inform everyone, that this anime is probably not going to have a happy ending….

What did you guys think of this week’s episode? What will become of our beloved characters? Two episodes left: Let’s see how this story unfolds!

One thought on “Terror in Resonance: Highs and Lows”