Is Esports the Next Generation of Home Entertainment?

Esports has been regarded as one the most controversial sports in the world. Not because of safety protocols or health endangerment to players, which Esports doesn’t do, but because of Sports Analyst’s, like Colin Cowherd, think that eSports shouldn’t even be considered as a sport. In September of 2015, Cowherd said that he was “going to leave if they (ESPN) ever signed a long-term contract with Esports.” And Cowherd then proceeded to say that “Esports is just watching someone play video games.” During that particular podcast, he laid siege to eSports, saying that “it shouldn’t even be considered a sport.”Even though it was two years ago, it still left a scar on eSports, angering fans of Cowherd which caused his ratings to drop. Colin then had to apologize about his. But regardless, eSports has exploded within the following years, having gaming teams like Fnatic, FaZe, Optic, and many more gaming teams compete within multiple gaming leagues across the planet.

In December of  2016, The League of Legends World Finals was coming to a close and team SK Telecom T1 won its 3rd world title. 21 Million People watched this all unfold. More people watched The League of Legends World Championship than people who watched the 2016 NBA Finals. This means that the eSports’ community is growing and it’s growing faster than expected. This has caused eSports to become a large, Household name across the world. And with the vastly growing amount of fans for eSports, Gaming companies like Logitech have become more involved in the world of eSports and intend to keep it that way. 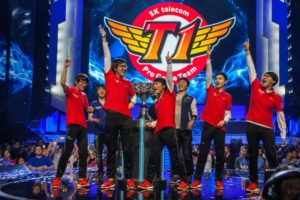 When eSports started to boom, Logitech was sponsoring big gaming teams like Cloud9, basically funding their headsets, keyboards, and more gaming accessories to help the team win in FPS titles like CS: GO and Call of Duty. Then Logitech started approaching other gaming teams like TSM, and then eventually, Logitech was making billions of dollars a year of the Teams and customers of the product, making Logitech one of the more respected gaming companies in the world. Logitech CEO, Bracken Darrell has said eSports has had a financial explosion since the company has done sponsorships with gaming teams.”It’s been an explosion of a business for us,” Darrell told MSMBC show, “Mad Money” on Thursday. “We’re getting deeper and deeper into eSports with every launch, and we’re really innovating very aggressively trying to improve the experience for not only the casual player or the competitive player but even the professional player.” Logitech has plans to keep investing in eSports and eSports teams in the following years.