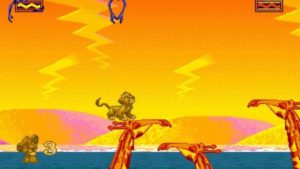 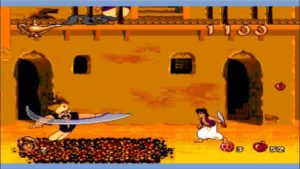 “I can show you the world. Shining, shimmering, splendid. Tell me, Princess, now when did you last let your heart decide?” What about this classic line? “If this is where the monarchy is headed. Count me out out of service. Out of Africa, I wouldn’t hang about, this child is getting wildly out of wing. Oh, I just can’t wait to be king!”

Whichever song hits you the most, these two games are inspired from some of Disney’s most iconic movies. The Lion King and Aladdin in both of their respective story lines are able to be played on the Nintendo Switch, PlayStation 4 and Xbox One all retained in their original 16 bit glory. Made in 1993 and 1994 on the Sega Genesis, these games have escaped the grasp of this writer due to not owning the console back in the day. Nighthawk Interactive has released several different versions of each game that you can choose from, depending on which console you may have chose this game for, the contents may differ as I’ll be discussing these games from the Nintendo Switch point of view.

Disney’s Aladdin has four different game modes you can play that have apparent differences to them. Console S, Final Cut, Demo, and Japanese versions. Console S version may contain bugs or errors that weren’t fixed on the final cut version and when you play the final cut version for the first time, a prompt will appear with a message along the lines as such. The saving grace to these games for someone that may just want to see how the game is supposed to be played and just wants to enjoy the movie in game form is the watch feature. You can literally watch a play through of either game and pause it to jump in the game at any point.

The L button on the Pro Controller, can rewind the game while you’re playing. In case you made a mistake against Jafar or fell down a pit and lost your last life, never fear the rewind button is always near. I didn’t realize there was such a thing until I died multiple times on the Aladdin play through. The two games are no pushover in difficulty and roughly if you’re flawless, these games should take 45 minutes to complete a piece, totaling in almost two hours of solid game play with cut scenes. The two games are almost exactly identical to the plot of their main stories with minor platforming differences if there’s a technical person reading the article. All in all, The Lion King and Aladdin games are to the tee identical to the story in game form and serves as a real treat to someone that has played or has never played either game that wants to enjoy it on a current generation console.

Each game has a museum that has videos from the original development team discussing the studio production of Aladdin/The Lion King respectively, how they went about making the game play like a cartoon, and also dives deep into the design process using color tests known as The Digicel Process. Nighthawk Interactive also gives the player access to behind the scenes game art concepts that didn’t make the final production as well guides from the movie art that helped shape the game’s design. If you’re an aspiring game designer or want to know the insider process of recreating such a classic game, watch these videos that the developers have provided at no extra cost.