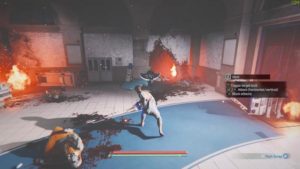 A game that will test your patience

In this souls-like game called The Surge 2, you begin the game after a monologue of sorts leading up to the creation of your character and starting in the first level. I wouldn’t say that the character customization was bad, but I will say that there has to be more things to find to spruce up your character after completing the tutorial. I haven’t even gotten past the tutorial due to the severe difficulty gap from what seemed to me as Warden Garcia just dominates you repeatedly. After dying an insane amount of times, I just chalked up this particular game as possibly not being my strong suit but I will mention that this game’s lack of guard mechanics early on is terrible. I felt as if it was easier to evade rather than guard and go blow for blow with the enemy. Every action you make in terms of guarding, attacking, or evading is based on your stamina and having all three work in tandem together while facing against a character like Warden Garcia, with an attack drone, makes the battle have the potential of ending quickly more times than not. Especially if you’re not familiar with Dark Souls/Demon Souls type of game play, I suggest you do not get frustrated quickly, as this game is centered around that quick thinking and possibly grinding up your character to be ready to take damage if you misstep. Hence the game punishes you tremendously for making the wrong guard move or taking too many hits while guarding.
I believe other titles have done this mechanic better, which is why I’m not totally against this mechanic being in a game. What I am not understanding about this game is how much of a start that is given to grasp the concept of what is expected of you to be great at this style of game. If this was my first glimpse of anything related to the sort, I’d be mortified. The graphics are certainly interesting and the combat feels a bit like the game Absolver also, I also can see the desolation within the art style and everything fits perfectly with the tone that was set. I just feel that ultimately the combat was rushed and by that aspect being a huge part of the game, halts me in my tracks to progress any further.