So Aogiri Tree, Anteiku, and the CCG are in this all-out war, while Yamori is violently and ruthless torturing Kaneki. Here, we see that his toe and fingernails have turned black from the constant regeneration from having them severed. But what I don’t understand is… Kaneki is faceless the entire episode. Not once, did they show Kaneki’s face in this episode. Why? Probably because it was all sorts of messed up from torture? Was that the animation company’s form of censorship? Or maybe it was a weird art style that I’m just missing. Either way, I’m kind of upset that I didn’t get to see Kaneki in this episode.

In this war, Amon is fighting off the ghouls, and Suzuya is having a ball killing every ghoul in his path, and Touka and the others are trying to find Kaneki before it’s too late.

Basically, this whole episode was one big fight, which is cool, since we haven’t gotten to see any hardcore fighting in a few episodes, so this will definitely fill that void for all you Tokyo Ghoul fans.

Here, we’re left with Touka in a face-off with her brother, Amon and the other CCG members ready to face the One Eyed Owl, and we’re left with only the image of Kaneki sitting alone, with his now white hair blowing gently in the breeze. Once again, faceless. 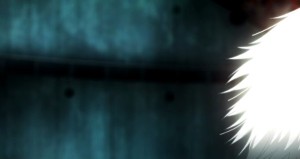 Overall, this episode was really good! Definitely an upgrade from last week’s episode, for sure. The animation was up-to-par with previous episodes, especially when Suzuya used a motorcycle to wipe out a whole flock of ghouls. I don’t know about you guys, but that psychopath is really starting to grow on me. By itself, this anime is really turning out incredibly well. However, it’s straying pretty far from the source material. Hopefully, the next episode will go into depth with Kaneki’s fingernail and hair transformation, because right now, it simply looks like Yamori’s form of torture was a huge makeover.

Next episode: Ghoul! The final chapter until next season (hopefully) What did you guys think of this episode? How will you think it will end? Let us know in the comments!