Okay, seriously, guys. What the actual heck is this anime? It’s so incredibly crazy and messed up, and even a little weird (Okay, scratch that. A lot of weird) but like a train wreck, you just can’t look away. Parasyte is a sci-fi/horror based anime that’s completely unique in its own way, if you’ve ever seen another character’s hand manifest into a talking blob… thing. Oh yeah, and it can also tear a dog’s heart out, while also spending all night up studying how to speak Japanese.

The story follows a high school student named Izumi Shinchi, whose been unlikely enough to be our protagonist (Sorry, dude. Who else is going to have the mutating hand in this series?) While asleep, a snake-like parasite attempts at sneaking its way into Shinchi’s ear, but since he was wearing headphones, it chose the next route, and tried getting to his brain from his hand. Snapping himself awake, Shinchi cuts off his circulation in his arm to prevent the creature at getting to his brain.

These parasites can apparently eat its host’s brain, taking over its body and allowing the head to split apart, morphing into different shapes and sizes (I told you guys, this anime was weird… A good weird.) But since this certain parasite didn’t get to its host’s (Shinchi’s) brain, it chose to manifest within his hand, turning into a little something like this whenever it decides it wants to wake up. 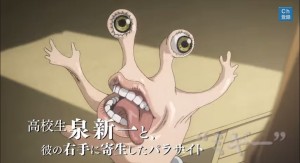 Seriously, dude. You might want to get that checked out.

It’s gory, it’s silly, and it’s all around a good anime. It kept me interested from the moment you see that alien bite that lady’s head off, right to the very end. However, if it was me, I would much rather not have a right hand, than have to deal with that thing all the time. Can you say creepy?

Anyway, what did you guys think of this one? Weirded out yet? Let us know in the comments!