Valve has been hinting at a few surprises over the last couple of weeks, and they have just announced their newest Steam venture: an operating system. In their attempts to make Steam for accessible, they discovered it would just be best to create an operating system built around Steam and having gaming as its primary function. The operating system is Linux based, and best of all it will be released for free! 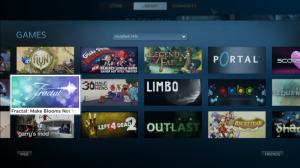 The SteamOS interface is made specifically to make things easier for gamers to incorporate their PC gaming into the living room. We’ve seen Valve test their living room capabilities already with the release of “Big Picture” mode for Steam (as seen on the left). This enabled easier controller based navigation of Steam & gaming onto the “Big screen” in family/living rooms.

Valve states on the official SteamOS page, “we have achieved significant performance increases in graphics processing, and we’re now targeting audio performance and reductions in input latency at the operating system level. Game developers are already taking advantage of these gains as they target SteamOS for their new releases.” Its great to see Valve not only making things easier for gamers, but developers as well!

Valve also states that with the SteamOS, will be an open platform. This means “Content creators can connect directly to their customers. Users can alter or replace any part of the software or hardware they want.” The Steam OS will also feature streaming your games from your Windows or Mac PCs to your Steam OS. They’re working on bringing media services to the SteamOS as well, allowing you to access music and videos through Steam and the SteamOS. Lets not forget they previously announced Family Sharing, and they will also feature family options.

The SteamOS has everything we know and love about Steam, and more. As time goes on, Valve will reveal more details. Stay tuned onto Valve’s website, as they release more information later this week about their Steambox!

One thought on “Valve Announces Steam OS: Bringing Steam to the Big Screen”