The original Gears of War released on the Xbox 360 way back in 2006. It was a huge commercial and critical hit that changed the way many gamers looked at modern gaming. It’s worth talking about the game here with the recent release of Gears of War: Ultimate Edition on Xbox One, a remake of the 2006 classic. We can still feel the after effects of Epic Games’ Gears of War nearly a decade later.

To put things into perspective, I would like to say that I have very little bias towards the original Gears. Yes, I am a huge fan of the series, but I didn’t play the Gears trilogy until last year- 8 years after the original game released. I could feel the strong effects of the gameplay and overall style of the game even all these years later.

Resident Evil 4 was arguably the game that started the revolutionary shoulder-view 3rd person shooter sub-genre, but Gears, clearly inspired by RE4, managed to up the ante in many ways. Controls were more fluid, and you no longer had to stand still in order to shoot something. Your weapons were made more easily accessible, and aiming was set to the second analog stick for superior control. The Gears series did not stop there, though. Epic Games made more and more fantastic control improvements all the way up to Gears of War 3.

We see shooters of all kinds having cover options to avoid enemy gunfire in games all of the time these days, but it was not always that way. When games of the past would try to make a quality cover system, they would usually fail or have a large amount of awkwardness left in them. Gears made cover mechanics simple, reliable, and a heck of a lot of fun to use. Essentially, invisible magnets would gravitate you towards cover when you pressed or held the A button. 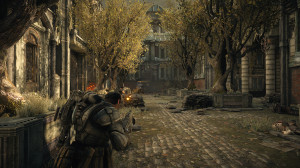 Unlike the earlier 360 shooter Perfect Dark Zero, in which you could only take cover in few specific and awkward locations that you were also glued to, anything could be used for cover and you could also move while under cover. A tap of the A button could also easily send you to another area near by with cover if you needed to move somewhere else tactically. Although future Gears of War games did polish these mechanics further, they still hold up better than in many other games released today.

In most shooters, reloading is a chore. It’s a waste of time that gives the enemy a chance to kill you. Epic Games made an amazing change by adding Active Reload to Gears of War. Now, instead of a boring chore, reloading was more of a risk/reward system sort of minigame. Hitting the reload button at the right time, and the player would be rewarded with more powerful bullets in the current clip. Landing close to that would let you reload quickly. Failing would result in your reload taking longer by having your weapon jam. It adds another great layer of gameplay that I don’t know why more games haven’t copied.

-Characters Were Relatable and Entertaining-

The main characters of Gears may seem like generic beefy soldier on the outside, but that is thankfully not the case. Although the story improved a lot in Gears 2 and 3, the first game does at least have the same really memorable characters. Character interactions feel real and are often very entertaining. Gears never takes itself too seriously or not seriously enough. Epic Games always knew how to get the right balance. 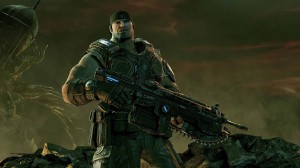 The same characters that could be spouting witty dialogue one scene could realistically be in a heartbreaking scene later due to how they feel like real people. Shooters often have the issue of having bland characters and dialogue, but Gears showed us all that effort can be put into the stories and personalities behind the characters.

-Gears Has Down Time Between Set Pieces-

Some shooter games just give you constant action, but sadly that can get boring fast. The entire series of Gears, starting with the first, knew that you need to give the player some down time between each action-filled set piece. It also lets the player connect with the world and characters that the developers but so much work into. Gears also has a wonderful mix of horror in with the action. Without those times to take a breather, no one would remember Gears as fondly as they do now.

The series may have made for some forgettable rip-offs, but Gears of War will never be forgotten. People still love the series to this day. Due to the reasons I mentioned above and possibly many others, the series has aged with grace. If you have never played a Gears games but are interested, definitely give Gears of War: Ultimate Edition a try. It even comes with downloads of the original trilogy… and Judgement.

Here’s hoping that Gears 4 will be the sequel that there series deserves.