Yes, what you see above is real: There will be a Windwaker HD Wii U bundle hitting this holiday season.

What was heavily rumored has finally been confirmed via a promotional WW HD video that Nintendo uploaded to their official YouTube channel and was promptly taken down. No details were given about the actual hardware of the bundle other than the fact that the GamePad will sport a snazzy Zelda decoration around it’s edges, but it’s safe to assume that this will simply be a 32 GB model.

But is Windwaker HD the right game for the job?

Why would Nintendo decide to go with this title for the holiday Wii U bundle? With higher profile games such as Donkey Kong Tropical Freeze and Super Mario 3D World, that are from much higher-selling franchises, wouldn’t it make more sense for the company to go with either of those games? 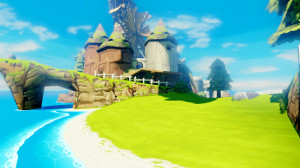 How It’s the Right Game

Perhaps Nintendo wants to get this ball rolling as soon as possible. As we all know, Donkey Kong Tropical Freeze is releasing in November of this year and Super Mario 3D World launches in December. Maybe the company feels that waiting until the last 2 months of this year will be too late, so instead they go with a game that is releasing in October. This would not only get early enticed buyers, but it will also give people more time to prepare to purchase the bundle. Nintendo is also probably using this game as a hype tool for the next Wii U Zelda title.

How It’s the Wrong Game

On-the-other-hand, if that is not Nintendo’s reasoning for choosing Windwaker HD, then it’s definitely the wrong game. Choosing 3D World over a GameCube remaster seems like a no-brainer, because it is. As I stated before, Donkey Kong and Mario are obviously much higher-selling franchises. They could get the system flying off shelves much better than WWHD ever could. Now under normal circumstances, a new Zelda game being bundle with any system would spell instant success. But the issue I see with Windwaker HD is that not only is it an old game, but it’s the least-popular and least favored Zelda of the bunch.

At this time, I’d say we don’t have enough information to determine if this game was the wrong choice to make. As I stated above, Nintendo probably simply didn’t want to wait until November to pull out a bundle, or for all we know it could be a completely different reason we’re not thinking about. Looks like we’ll have to wait until an interview is done to find out Nintendo’s reasoning behind this somewhat odd decision.

19 thoughts on “Wii U Bundle: Did Nintendo Choose the Wrong Game?”