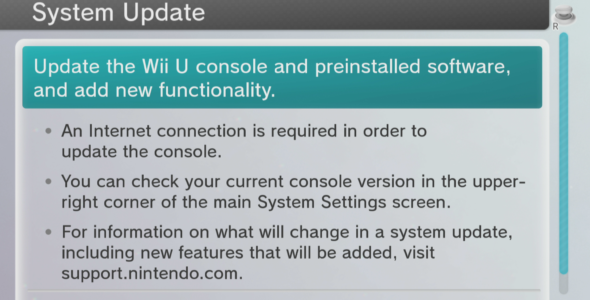 There’s a Wii U update available for download. It’s unclear whether or not this is the “Summer” update that Nintendo stated would be coming out around this time, but the file size of this download is 648 MB, which is much larger than any typical update.

I’m currently updating my Wii U as I type this, but I’m not getting my hopes up because Nintendo likes to discuss and detail something like this before they actually release it. Also, Nintendo stated that there was supposed to be a long maintenance going on right now, and yet the Nintendo Network didn’t go down.

This could very well be the major update, but let’s no hold out breathes until we get some kind of confirmation. Check back later on and we’ll have updated information regarding the Wii U update.

UPDATE: Here is the list of improvements from the update:

6 thoughts on “Wii U Update is Live”