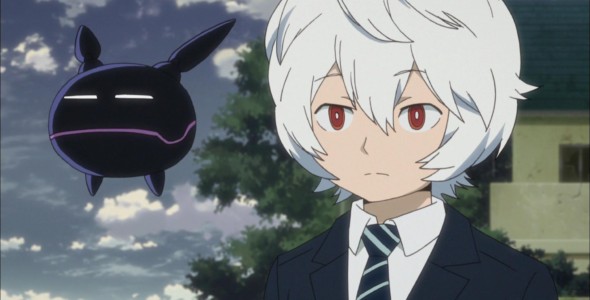 First diving into this series and watching the first two episodes, I gotta say, I’m pretty interested in this one. World Trigger is an anime about a world living in fear of these monsters called “Neighbors” that recently began appearing out of random gates in the sky and causing havoc wherever they go. That’s when people called “Border Agents” come in and save the day, using their own Triggers as weapons against the Neighbors. The story follows a megane character named Mikumo Osamu who meets a transfer student by the name of Kuga, who he later finds out is a Neighbor himself. Craziness ensues.

First impressions though, is the cheesey magical girl transformations whenever Border Agents use their Trigger. Also, in the beginning, we see Osamu being rescued by a Border Agent. This event was probably the moment when he became one himself, but it has yet to dive in and explain it to us, however, we can probably make that assumption ourselves. The animation isn’t all that great, but the story is really captivating, and Kuga’s character is adorable and totally hilarious. His signature duck face is my favorite.

The first two episodes are pretty decent are were good enough to keep me interested, especially whenever Kuga, ignorant of human laws and simple morals, beats up numerous thugs for trying to steal his money. He even offers all his cash to a woman whose car got banged up whenever it hit him unexpectedly.

We also got to meet our fourth protagonist, a young girl who is obviously concerned about the Neighbors that were unleashed within the city. She’ll probably come to become of more importance later on, and I’m excited to see what she’ll offer to the plot.

Would I continue with this series? Yeah, I guess I would. I love Kuga, and there are a lot of things I want to know when it comes to the story and all these other squads of Border Agents. What’d you guys think? Are you enjoying the series so far? Let us know, in the comments!