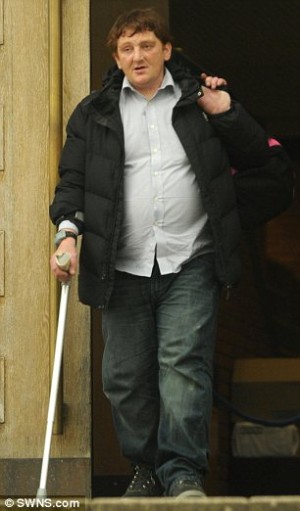 According to the dailymail.co.uk , Jason Martin (seen left) did the unimaginable to his neighbor, he gnawed on his “joystick” and “pokeballs”. I know many of you are asking yourselves “How exactly did this occur?” Well, Jason Martin from Dover, Kent, was absolutely angry at his neighbor for causing so much noise. Richard Henderson was an avid Xbox gamer, and didn’t quite understand the existence of headphones. Because of this, Mr. Jason decided to go over to Richard’s house and start an argument with him.

Dailymail reports that Jason then took this opprotunity to gnaw (shivers), upon Richard’s family jewels & staff, to inflict as much damage as possible. Well, it was super effective, because Richard said that he had “never felt such excruciating pain like that before in his life”. Richard rushed to he hospital and needed emergency surgery.

Jason is getting 7 years in prison for the attack. But I believe he deserves more and psychological evaluation. But this could have been avoided, if only Richard used some headphones, or turned down his gaming volume. On another note, this story is vaguely game related, but I’m sure the media will ignore it since it was an attack on a gamer. Fox News and other so called “news outlets” love to paint negative pictures of gamers, but what about this lunatic? Was he into sharks? Is his favorite movies “Jaws”? We’ll never know. But I believe the best thing we can learn from this story, is to make sure our gaming hobby doesn’t disturb the people around us.

3 thoughts on “Xbox Gamer Gets His “Joystick” Bitten off By Angry Neighbor!”